For me there are few countries left in our overcrowded world that can offer the natural riches that Guyana can. The very fact that almost seventy five percent of the country’s landmass remains untouched rainforest is enough to make the country special, but its extreme biodiversity, un-commercialised natural attractions, proud and traditional rural communities and its sustainable outlook make it truly unique.

I was very excited to explore the wild heart of interior of Guyana and curious as to what wildlife I might encounter in this still very unexplored country. I started my week long journey at Karanambu Ranch; the home of Diane McTurk, widely known for her work rehabilitating orphaned giant river otters. Unfortunately I never had the opportunity to meet Diane on my trip, but did meet Trip, an orphaned giant otter that she was rehabilitating at the time. Karanambu sits on the edge of vast Rupununi savannahs in central Guyana. On my first morning at the lodge, we made our way out into an area of rolling grassland dotted with huge termite mounds and seasonal ponds. The savannah here is home to a healthy population of giant anteaters and it took very little time to track the first one down. With some patience we were able to approach quite close on foot downwind as these curious animals rely almost entirely on their sense of smell to avoid predators and have very poor eyesight.

Back at the ranch for a superb buffet breakfast, a fellow guest told me about a mysterious animal that she described as “moved like a squirrel but looked like a cat” that she had previously spotted running away from the back of the ranch. It soon became apparent that she had seen a tayra! Tayra’s are large forest dwelling mustelids (looking a little like a supersized pine marten) that feed on both meat and fruit and have distribution ranging from Mexico to northern Argentina. The wonderful hosts at Karanambu then informed me over breakfast that this tayra was making frequent visits to the mango trees at the back of the ranch. This was thrilling news to me, as this is such a difficult creature to see.

However at news that it may return and with just 40 minutes left until I had to leave, I wasted no time in finishing my breakfast and hiding amongst some debris at the back of ranch overlooking the mango trees, hoping it would return in the short window of time I had left. Of course it got down to the final 10 minutes until my luck was definitely in, when this enigmatic creature carefully emerged from the forest edge to collect a sizeable mango giving me a wonderful prolonged sighting. Karanambu offers some of the finest wildlife viewing in the entire country with giant otters, red howler, brown capuchin and common squirrel monkeys, huge black caiman, Amazon tree boas and paca all regularly seen. Not to mention an extraordinary bird diversity including the rare crestless currasow, sunbitterns, golden-spanged piculet and localised bearded tachuri to name just a few.

My journey took me next to the Amerindian village of Surama, set within five square miles of savannah and surrounded by the densely forested Pakaraima Mountains. Surama’s inhabitants are mainly from the Macushi tribe and still observe many of the traditional practices of their forebears. Here I learnt the story of how the enterprising community first set up and now manage the lodge we stayed in and how it provides them with a sustainable income. The trip along the Buro Buro River here by quiet paddle canoe offered superb sightings of macaws, aracaris, woodcreepers and mixed flocks of tanagers and with luck tapir, black spider monkey and giant otter could also be seen.

Iwokrama was established in 1996 by the government of Guyana and the commonwealth, to create a reserve that will leave a lasting ecological, economical, and social benefit to its local people as well as the rest of the world. While I stayed at the lodge I also had time to learn about the Iwokrama science committee here who are currently studying the ecosystem services provided by the forest and how they are then converting this into a monetary value to show the importance of tropical rainforests in economics.

I was especially thrilled by the abundance of large macaws here, and was treated to fantastic fly pasts from blue and yellow, red and green and scarlets. One of the specialty birds I saw here was the bizarre capuchinbird, a strange-looking member of the cotinga family that produces an incredible song during at its lek (mating ground) that has a strong resemblance to the sound of faulty chainsaw. There is a great capuchinbird lek just twenty minutes’ walk into the forest from the lodge.

My favourite experience at Iwokarama though, was the hike I made to the summit of Turtle Mountain. Although a strenuous walk in humid conditions, the breath-taking views of untouched rainforest as far as the eye could see in every direction from the top was truly unforgettable! Unfortunately my pictures in the gloomy cloud, did not do justice to the exceptional views and incredible sense of wildness that I experienced on the summit of this mountain. There was plenty of wildlife to be seen here too and I was rewarded with good views of several black spider monkeys and a large troop of Guianan red howler monkeys feeding in the canopy below. Birds included the rare orange-breasted falcon and more fly past macaws, red fan and black headed parrots. 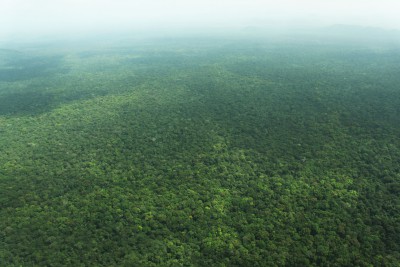 Another of Iwokarama’s highlights is the thirty five metre high Canadian built canopy walkway. The walkway gives a completely different perspective on the forest ecosystem and allows a chance to see shy canopy specialist birds such as the elegant pompadour cotinga, pied puffbird and green aracari and with luck the shy brown-bearded Guianan saki monkey. However what happened on my first early morning visit to the walkway, will live in my memory forever. Not long after the group I was with had just finished joking about how great it would be to see a harpy eagle as if on cue, the holy grail of the Neotropical bird world itself majestically flew into view just 10 metres past our heads and conveniently landed in a nearby tree to pose for pictures! Magic!

The superb Atta Rainforest Lodge provides the accommodation while visiting the walkway. The lodge has deployed camera traps along the trails close to the lodge which are always a great way of discovering just what is out there. They had recorded a plethora of large and small mammal species including many different tapirs, ocelots, jaguars, pumas and collared peccaries all on the trails right by the lodge! The transnational highway (a dirt track) that runs past the lodge has a good record of sightings of jaguars particularly (About a one in ten chance per drive). Driving along this transnational road during dawn and dusk and after dark with spotlights offers a good chance to see a whole range of Neotropical mammals. I saw several red-rumped agoutis around the lodge clearing here as well as a pair of habituated black curassows (A Guianan shield endemic bird) which pass through the clearing at dawn most mornings. Red brocket deer and the spectacular crimson fruitcrow are also seen here on a fairly regular basis.

Next came the Amerindian community of Annai where the very comfortable Rock View Lodge was our base. This lodge offers some of the best accommodation in the interior with a particularly welcoming swimming pool. Although the lodge is not in the most strategic position for wildlife, even here I saw a surprisingly high diversity of wildlife including a giant anteater with a baby on its back on the savannah just at the back of the property. We also walked up the Panorama trail here which leads up a large hill into stunted forest. Here I saw some good birds as well the striking yellow banded poison dart frog.

Lastly I made the lengthy but fully worthwhile journey to the remote community of Rewa. The community of approximately 220 people here is predominately Macushi with a few families of the Wapishana and Patamona tribes. Villagers practice subsistence farming, fishing and hunting with little opportunity for cash employment. In 2005 the community constructed the Rewa Eco-lodge so that they could establish a sustainable eco-tourism business. My favourite feature of the lodge is the breakfast table which is positioned overlooking the Rewa River and dense rainforested banks so you can watch macaws flying overhead and black caiman swimming past while your breakfast.

The community was exceptionally friendly and even invite guests to see their school. Primates are particularly abundant here with Guianan red howler, brown and weeping capuchin, Guianan brown-bearded and white faced saki, black spider and common squirrel monkey are all regularly spotted. The best primate for me though was a troop of rare golden-handed tamarins which passed through the forest bordering the lodge just before breakfast. Another highlight here was finding a group of giant otters hunting along the Rewa River in the late afternoon. There was a youngster in the group who was particularly curious about us and we were able to watch the adults haul up and munch through some impressive catfish.

The Force of the Falls

My first view of Guyana’s number one attraction was just a cloud of mist rising from a clearing in the sea of rainforest below. As we neared, a Mexican wave of gasps of awe spread through the plane as we were all treated to our first views of magnificent Kaieteur Falls.

Almost every visitor to the falls arrives by plane with this unforgettable low fly by over the very top of the cascade their first experience. Kaieteur thunders over a precipice, plummeting two hundred and twenty four metres, making it the longest single drop waterfall in the world.

Once on firm ground, I made my way to Johnson’s viewpoint which is the furthest point from the falls but gives you the greatest sense of scale of this natural wonder. The most enduring story for the name of the falls is that of Kaie, a great old chief of the local Patamona tribe, who to save his people from being destroyed by the savage Caribishi, sacrificed himself to the Makonaima, the Great Spirit, by canoeing himself over the falls. On the way to the next major viewpoint I explored the unique cloud forest ecosystem created by the microclimate of the falls. Here you can enjoy the impressive tank bromeliads – the world’s largest and themselves home to the tiny, endemic golden rocket frog which can usually be tracked down hiding deep inside the bromeliad. Further along the trail you emerge at the aptly named rainbow viewpoint which for me was the most impressive view of all. The final viewpoint however is from the top of the falls, which allows you to walk right up to the edge and look down on the dramatic view below. The most special part of Kaieteur that is relevant to all of Guyana though is that it has remained natural, un-commercialised and still gives you a tremendous feeling of adventure and discovery.

The Highlights of Guyana

This group tour takes you to on an unforgettable journey into one of South America's most spectacular and least visited countries.

The Wildlife and Culture of the Three Guianas

The Highlights of Guyana

The Natural History Highlights of Guyana

Natural Guyana Off The Beaten Track

The Natural Highlights Of Guyana, Trinidad and Tobago