Trip Report: Wildlife of The Republic of Congo

Trip Report: Wildlife of The Republic of Congo

Being the second largest area of tropical rainforest on earth, the Congo Basin offers some of the most exciting, different and off the beaten track wildlife watching in Africa. Tour consultant John Melton recently visited the Republic of the Congo and describes some his highlights from trip below.

Only fairly recently has it become possible to safely and comfortably explore the tropical rainforests of this region, as there are now a series of well run camps within the Odzala-Kokoua National Park in the far north west of the country. The park which covers 13,500 square kilometres was proclaimed by the French administration in 1935 making it one of the continent’s oldest National Parks. 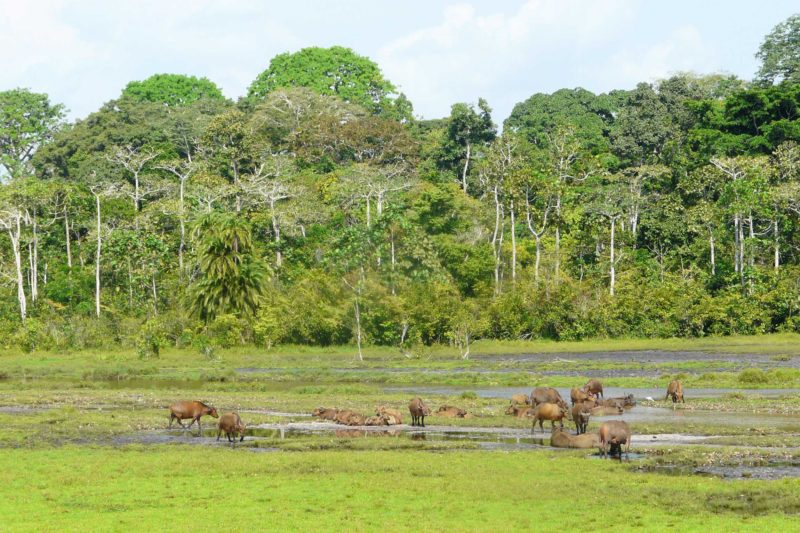 There is a surprising variety of habitats within the park that not only includes dense primary rainforest but also open savannah, large rivers and swamps, gallery forest and many natural forest clearings known as baies. These habitats and resources have produced one of the most magnificent biodiversity hotspots in all of Africa, yet the forests here are still one of the least studied in the world. There are over 300 regular breeding bird species within the park with nearly another 150 species thought to use it on their migration, while at least 26 species of butterfly are thought to be locally endemic including some newly described species. However the mammal watching in the park is perhaps the greatest attraction with at least 114 species present, including over 20,000 western lowland gorillas, healthy populations of chimpanzees, and around 10,000 forest elephants. There are also forest buffalo, red river hogs, bongo, sitatunga, black-fronted duikers, western harnessed bushbuck, crowned and putty-nosed monkeys, agile mangabeys, guereza colobus, bushbabies (galagaos), pottos and spotted hyenas that are all also regularly seen. 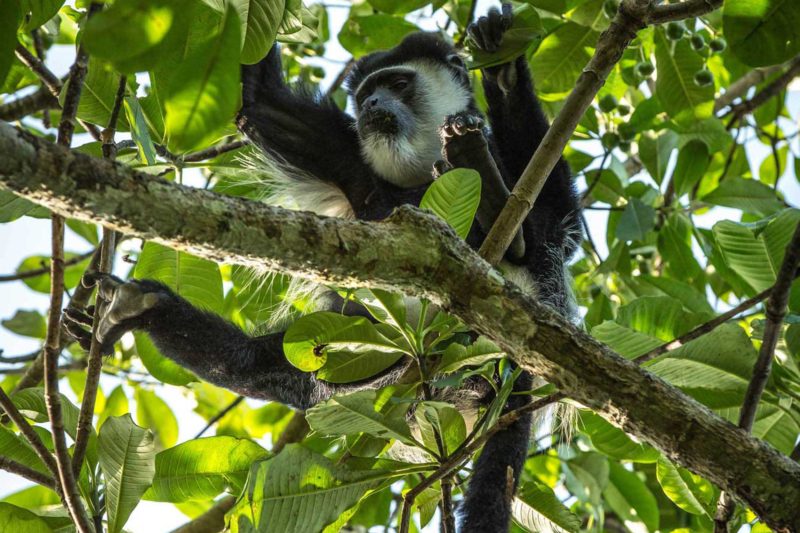 My first destination within Odzala was a camp called Ngaga, which was set up for its accessibility for tracking western lowland gorillas. The area around Ngaga Camp is thought to be home to nearly 4 gorillas per Km2 divided among roughly 24 groups. The research into the gorillas here has been spearheaded by the Spanish primatologist husband and wife team of Dr Magda Bermejo and German Illera  who have been researching western lowland gorillas from a base here for 17 years. The current research focuses on 2 groups called Neptuno and Jupiter, and a third control group led by Pluto. 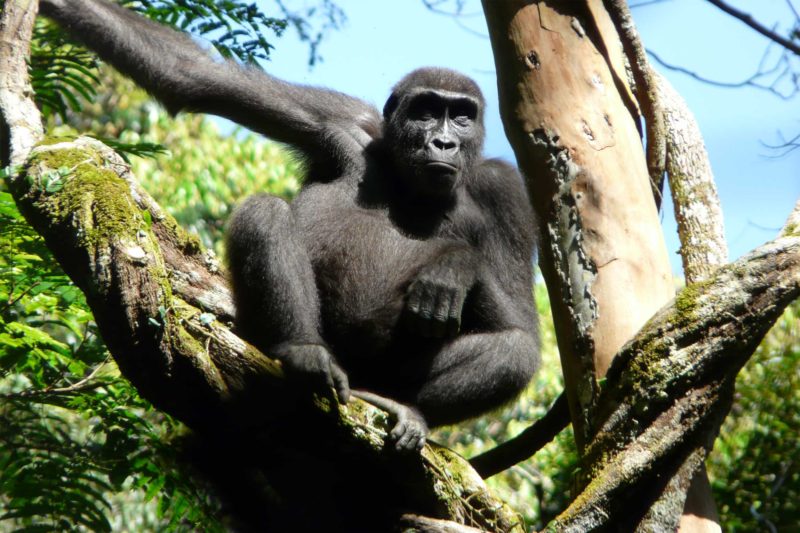 On our first day out from the camp we drove for just over 2 km before setting off into the forest, bush whacking (tracker and guide with secateurs!) as we went through the dense vegetation (marantacaea). After about 45 minutes walking, the guides found the nest sight where the gorillas had slept the following night. However there was no sign of them here now, so we were again in the expert hands of our local guides and trackers to locate where they would be next. It was not for another 45 minutes before the group was encountered. At this stage face masks were donned, and head nets organised, to protect from the sweat bees that are often following the gorillas. 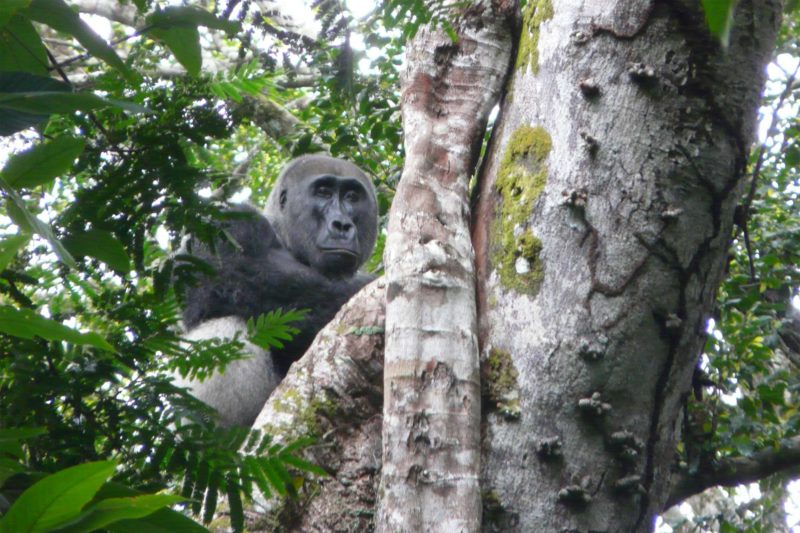 Our first encounter was with just a few gorillas up in the trees as they were feeding on the marantacaea shoots and fruits, but they then moved on and we carefully followed to enjoy better and better views of them in the trees, often with some nice scenes of individuals about 10 metres up in the sunlight. As they moved away we slowly followed them again, this time we were able to obtain views on the ground through the thick vegetation, before we finally encountered them in a clearing at a root site for some magical clear, close and prolonged views. These sites where the gorillas eat roots are only typical to this area and not seen in western lowland groups elsewhere. Neptuno, the silverback who is 35 – 40 years old was here in a group of 14 individuals. 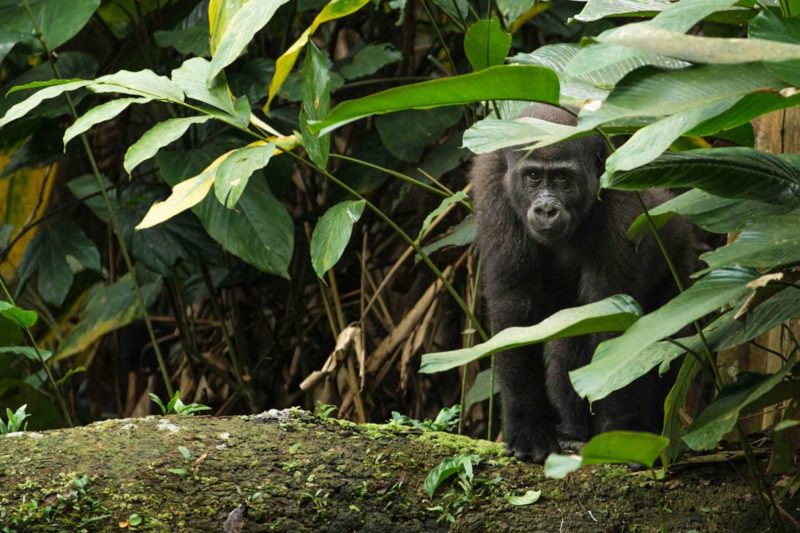 Although the distance covered to locate the gorillas was not that great, it is through some thick vegetation, but the sublime encounters with such impressive gentle giants will live in the memory for a very long time.

That evening we enjoyed a night walk from the camp as species such as hyena, forest elephant and buffalo are unlikely to be encountered in this area. The walk is about an hour along the access road where we saw many bush babies (galagos), bats, frogs and insects, all under a beautiful starlit sky. Birdlife in the area includes up to 7 species of hornbill, with white thighed and African pied hornbill being particularly common, plus large flocks of African grey parrots, plumed guineafowl, Hartlaub’s duck, Cassin’s malimbe and bare-cheeked trogon.

Moving on to the lovely Mboko Camp, we visited our first forest bai. These baies, or forest clearings, are distributed throughout the National Park and are generally created by the presence of a water source. Many contain soils that are naturally rich in salts and minerals which attract wildlife, thereby providing excellent opportunities for clear, unobscured wildlife observation. At and around the Mbwebe bai, close to the Lekoli River, we had sightings of grey-cheeked mangabeys, huge hammer bats, some forest buffalo, a couple of western harnessed bushbuck and guereza colobus. While on a relaxing float down the Lekoli River by boat in the late afternoon we saw agile mangabey and putty-nosed monkeys and the river is also home to African dwarf crocodiles and slender-snouted crocodiles. 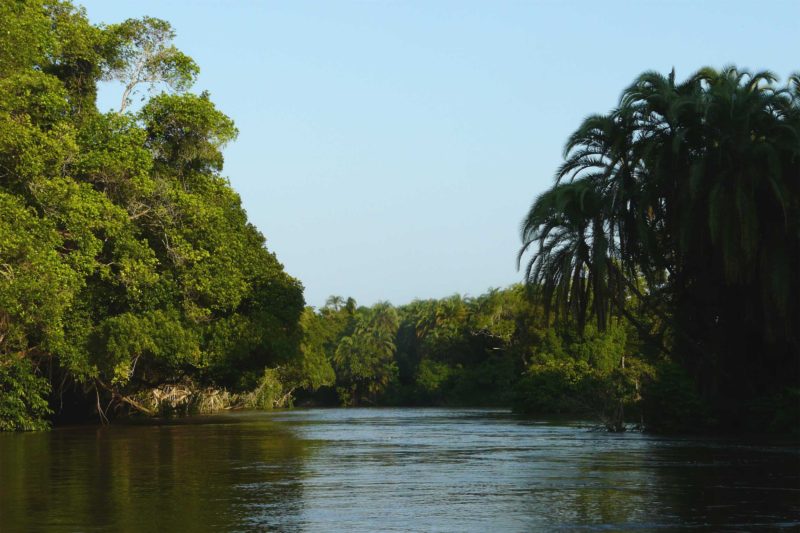 Our final location was Lango Camp, which we reached via a relaxing kayak down the Lekoli River and a 1 hour and 30 minute walk through the bai to the reach the camp. This can be an exciting walk depending on the wildlife activity – for example we had to bypass a large herd of buffalo and there were plenty of signs of elephants all around. Lango Camp itself is situated on the edge of a huge bai, on a raised platform with just 6 guest cabañas. Guereza colobus monkeys are frequently seen around the camp and elephants also wander through regularly. From this camp we enjoyed several exciting but sometimes quite adventurous wildlife walks across the bai, along elephant trails and through patches of dry forest. Sightings included secretive forest franklins, a tiny blue duiker, grey-cheeked mangabeys, forest buffalo and best of all; plenty of forest elephants. Most evenings forest elephants gather around the bai and can be watched alongside herds of buffalo, sometimes bongo and red river hogs and plenty of birdlife all from the comfort of the lodge. 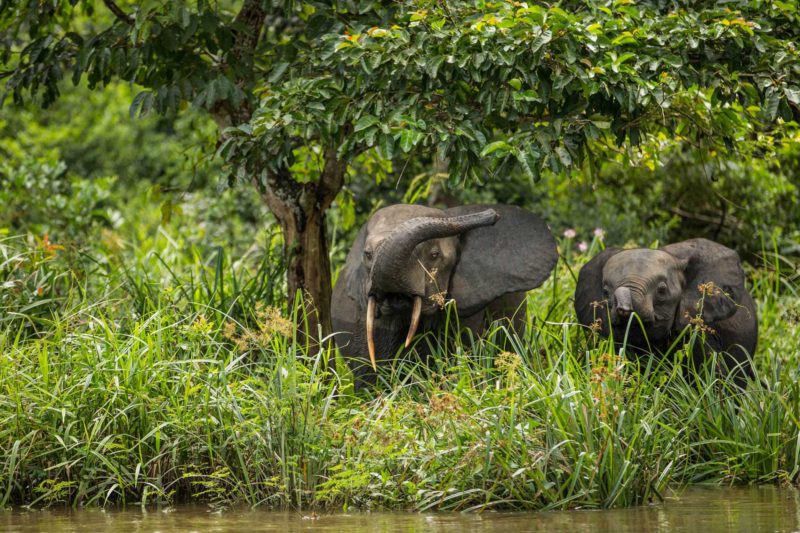 However at night (from around 2300 both nights we were there) the bai can get incredibly noisy as elephants gather and interact. If there is a bit of ambient light though, with binoculars it is even possible to see the elephant activity still at this time. I spent about an hour watching around 20 elephants one night, plus there was a visit from a spotted hyena to round off a fantastic trip.

With such a pristine ecosystem and some of the most spectacular and endangered species in Africa, a visit to the Republic of Congo’s; Odzala National Park is not only a memorable wildlife experience, it also helps to conserve such a wonderful place from the constant threat of exploitation. For further details of our tours to the Congo, see our current group itinerary here: The Wildlife Of My Congo Tour Itinerary