The Snow Leopard; for many wildlife lovers and well-travelled naturalists, just glimpsing this charismatic big cat in its breath-taking mountain habitat, would be their equivalent of the Holy Grail. 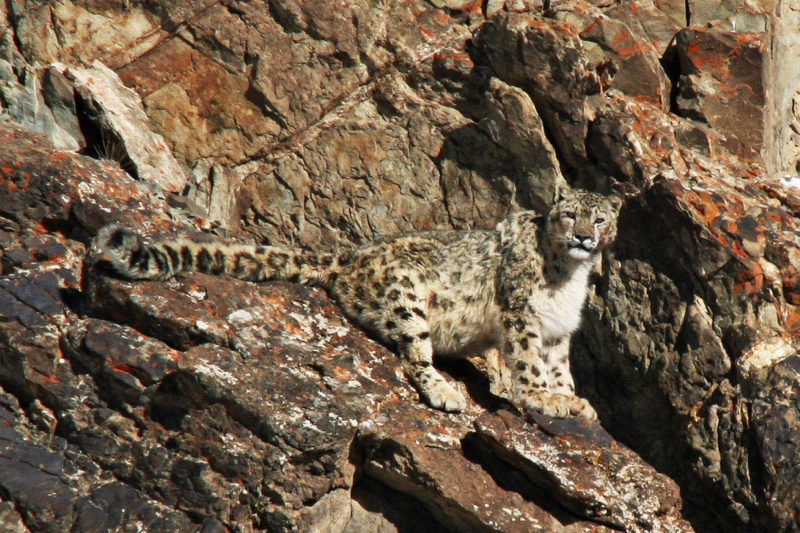 We are pleased to report that our first ever group tour to the Indian Himalayan region of Ladakh in search of this grey ghost was a great success, producing sightings of 5 different snow leopards, including a remarkable sighting of two cubs with mother and father together. Staff member Ian Loyd, who accompanied the trip recalls his highlights.

For most of us that attended this exciting group, I suspect that we never really let ourselves believe that we would actually see a snow leopard. Given how rare, secretive and perfectly camouflaged these big cats are even being in the right place at the right time of year with some of the best trackers does not guarantee success. Until fairly recently very few foreigners had ever seen one in the wild, and film crews had spent months trying and often failing to capture any footage of the almost mythical cats. Finding a rare and perfectly camouflaged grey cat often against a backdrop of fifty shades of grey in a vast mountain landscape can seem like an impossible task.

In recent years though, the Rumbak Valley in Ladakh’s Hemis National Park, and the remote Himalayan valley of Ulley have both emerged as two of the best sites in the world to see this most elusive of big cats. Due to improved local knowledge and the increase in guides and trackers out searching prime habitat during the peak winter months, sightings are now becoming much more regular, although the conditions of this unique trip still make it fairly demanding. 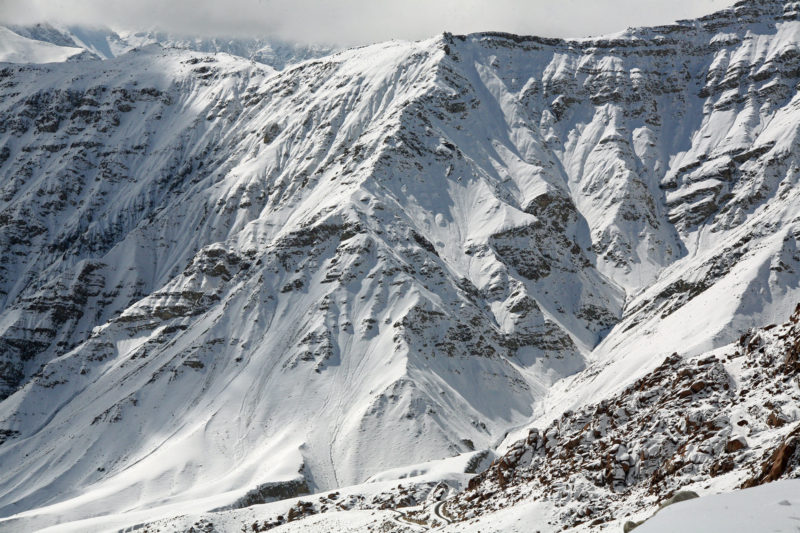 As we awoke on our first full day in the Ulley Valley, surrounded by stunning mountain scenery, with the only sound in the thin mountain air being the cry of the local red-billed choughs, there was definitely a sense of anticipation and excitment. The fresh snowfall overnight had created the ideal tracking conditions for the day ahead and the experienced tracking team was already out looking. It was then towards the end of our breakfast, inside the warm and cosy homestay, that the news broke; a mother snow leopard and her two cubs had been found! I think we all expected to finish our breakfasts immedatley and get up and go. Instead we were told we could relax and enjoy another cup of tea, as the cats were not far away and currently asleep under a rock, so there was no great hurry! When we arrived at the site, the mountainside in question was criss crossed with numerous tracks, so it was not clear which of the many rocks in the vicinity, the snow leopards were actually hidden under. Luckily different snow patterns on the rocks made them possible to differentiate and various prominent rocks were given names such as “Smiley Rock”, based on their appearance which both aided locating the cats and made for some interesting and descriptive conversations, while we waited. However we didn’t have to wait too long for the action, as the mother snow leopard soon emerged and walked out into the open to give everyone a superb, though distant view. She was then followed by both her cubs. 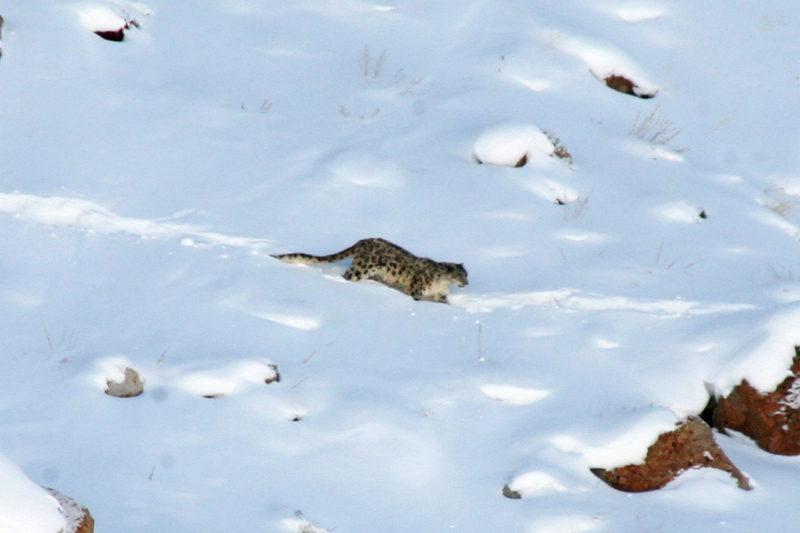 Minutes later, all of our jaws dropped simultaneously as a male then appeared on the scene, and 4 snow leopards were visible at once. This was an exceptionally rare sight. The consensus was that the normally solitary male, was only joining his family, because of another male that had moved in nearby and he was protecting his cubs. Seeing snow leopards at a distance like this, is a fairly typical sighting, but great detail could still be made out through the telescope and watching them move through their mountain landscape like this was very special.

This sighting was made even more memorable by the howling of a pack of Tibetan wolf in the distance and the huge lammergiers and golden eagles that soared past while we enjoyed the scene.

The Ulley Valley and its other interlocking valleys are thought to support a density of around 8 – 10 snow leopards, and due to the access road, much of the sightings can be made from the road or from short walks. However due to the vastness of the landscape here and lower number of trackers, sightings are generally less frequent than in Rumbak, our next destination. 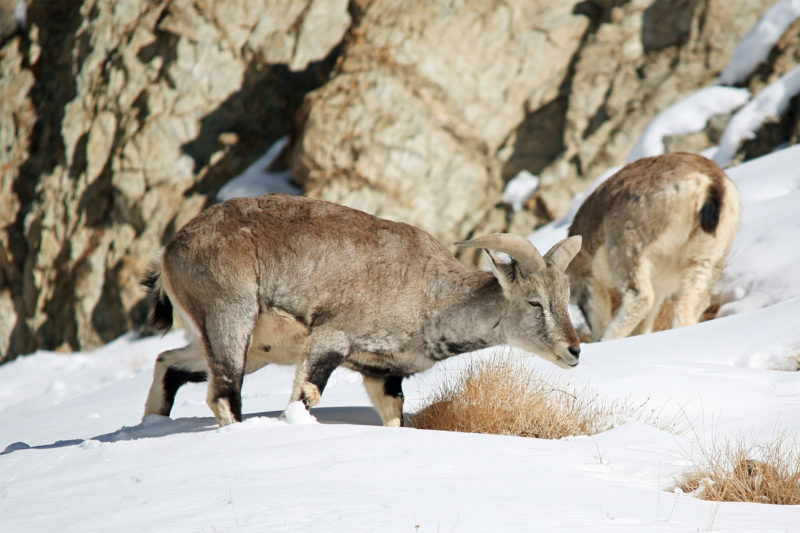 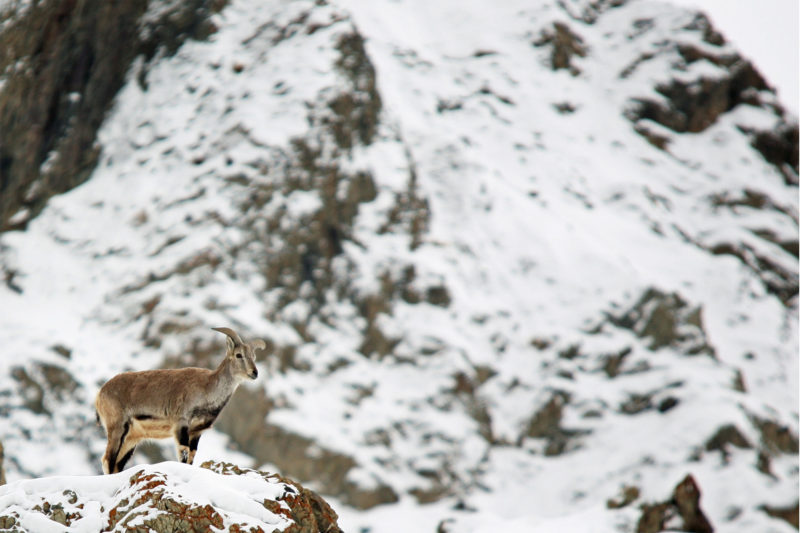 The Rumbak valley, sits close to the entrance to the vast 4,400 square kilometre Hemis National Park, which is thought to be home to around 200 snow leopards. There is a particularly high concentration of prey here for them, especially during the winter months when herds of blue sheep (bharal) descend into the lower valleys, followed by the leopards, making them easier to find.

The previous days of the trip had already been fantastic, but better was still to come, as we heard that a snow leopard had been seen close to the Rumbak Village, very near to where we were staying. When we arrived at the site, it became clear why the leopard was staying in this area. It had made a blue sheep (bharal) kill and was resting nearby to digest and guard the kill. 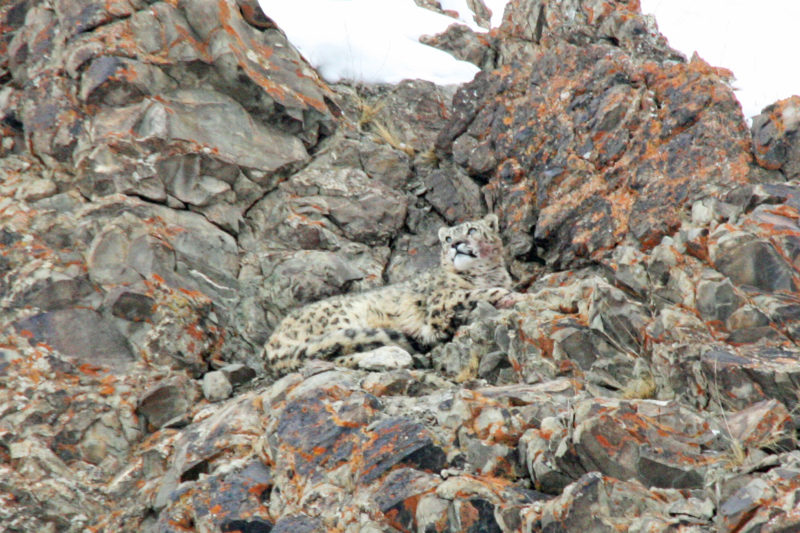 This was very fortunate as it then stayed in the area for days to come, feeding from the kill from time to time and protecting it from packs of wolves, which enabled us to watch it over the course of several days. 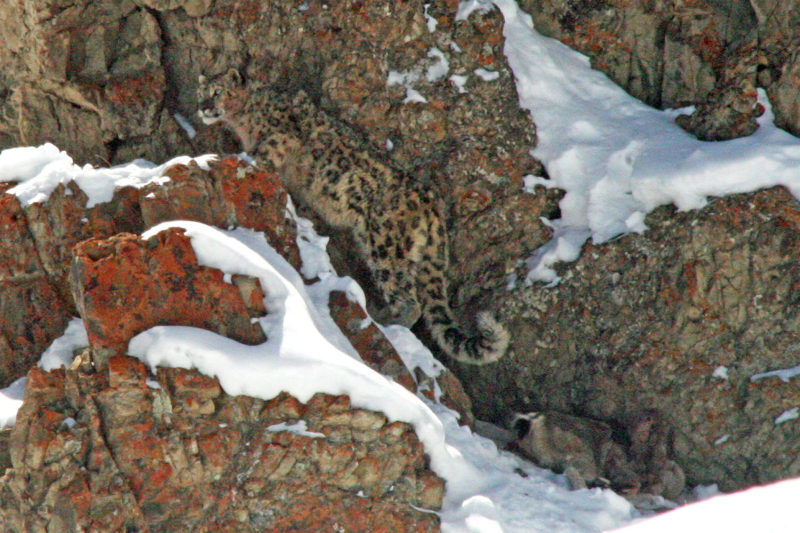 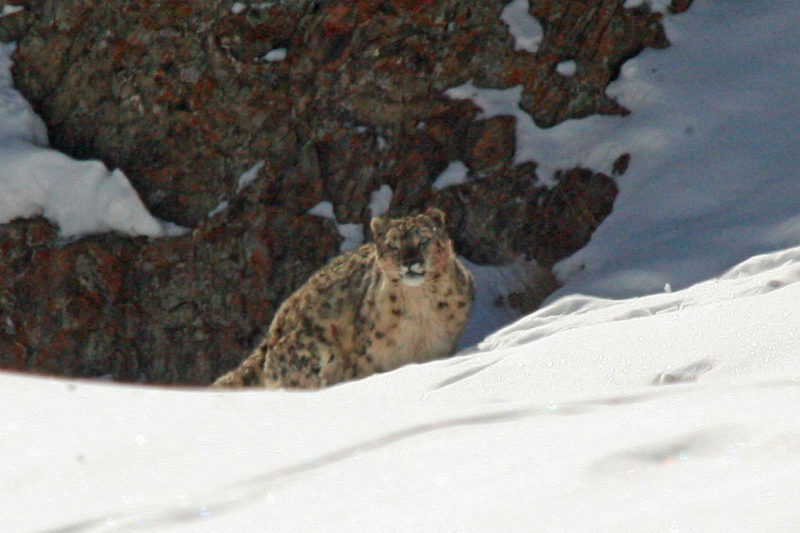 On a few occassions it would leave the kill to chase away magpies that came too close. 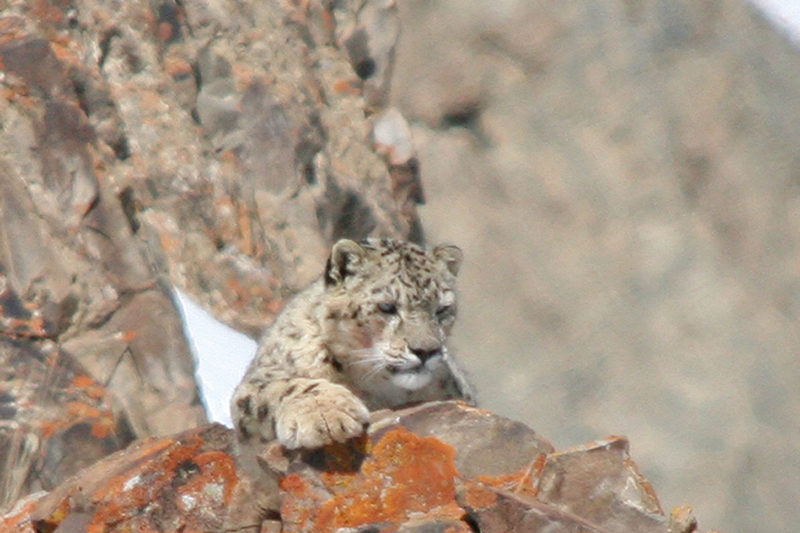 On our last day with this snow leopard we thought we might even be treated to the ultimate sight of a hunt, as a group of blue sheep made their way below the sleeping leopard pictured in the top corner of the photograph below. However she clearly still had a very full belly and was not interested in another meal just yet. 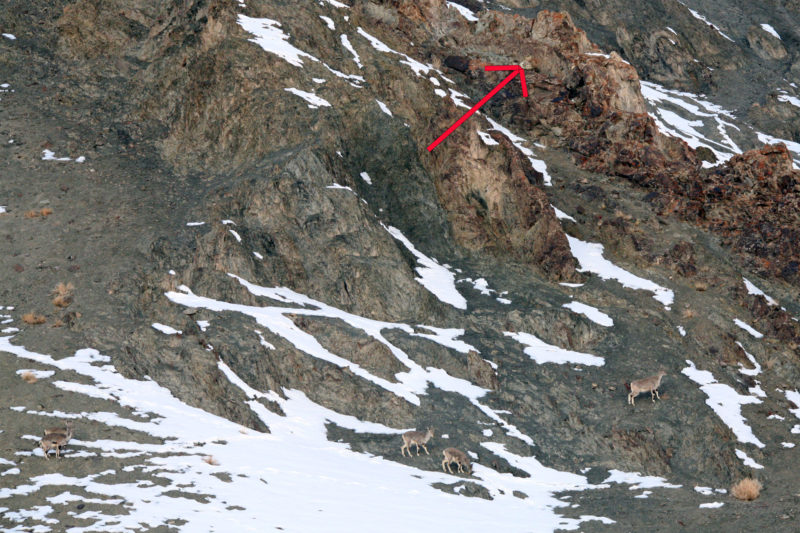 Although the snow leopard sightings were of course the absolute highlight of this trip, they were not the only exciting experience, as the sensational Himalayan scenery and fascinating cultural insights were also highly memorable. By staying in the comfortable homestays (rather than camping) with heated rooms and home cooked food we also had the opportunity to interact with our friendly Ladakhi hosts. 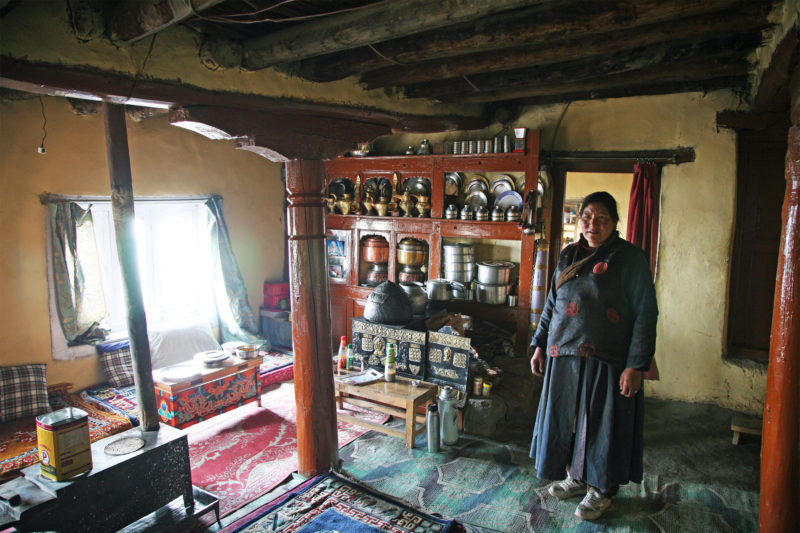 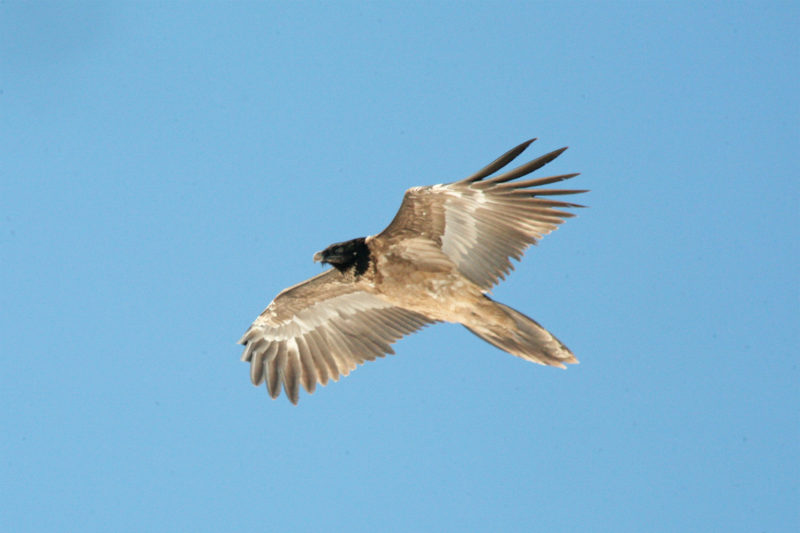 Through this we learnt of their hardships in surviving in this hostile environment year round, but also how this brings all the villagers together to work as a community and share jobs and resources. There were also other wildlife delights too; with abundant blue sheep, Ladkah urial, Asiatic ibex, Royale’s pika, woolly hares and numerous birds of prey such as lammergiers, Himalayan griffon vultures, golden eagles, plus Himalayan snowcocks and ibisbills to name a few. We also found fresh tracks of Tibetan wolf and Eurasian lynx. Although sightings of snow leopards can never be guaranteed, this tour certainly offers an excellent chance whilst being as comfortable as possible. Simply spending time in this incredible part of the world will leave a lasting impression on you. 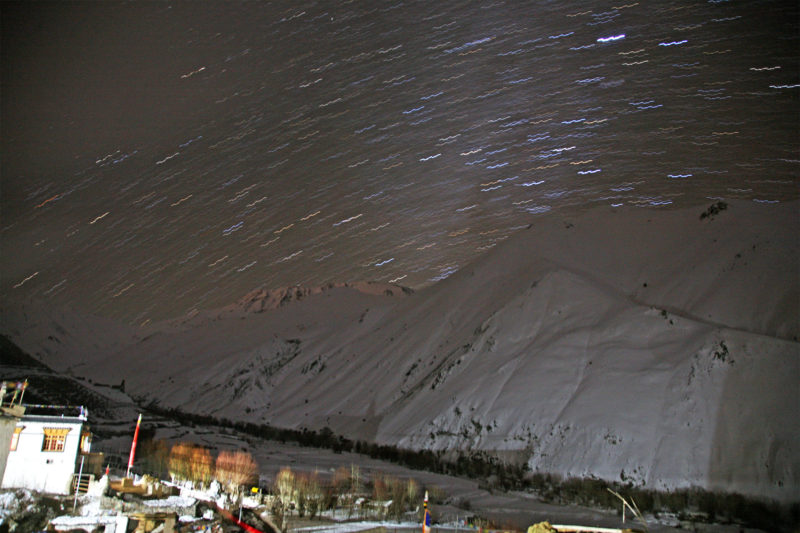 Details of our 2018 departures can be found here:
Click for full tour details of Group One (PDF)

An unforgettable search for the Ghost of the Himalayas