Spotlight on The Fossa of Madagascar

Spotlight on The Fossa of Madagascar

Although perhaps being one of Madagascar’s lesser known species, the predatory fossa is every bit as exciting as its lemurs, chameleons and leaf-tailed geckos. In appearance the fossa looks rather like a small puma with an incredible 3 foot long tail, but it also has many civet and mongoose like features. It’s easy to understand why taxonomists have long been baffled as to which carnivore family the fossa belongs to. For a long time it was thought to be a member of the mongoose or civet family, but the most recent research suggests it is a member of the unique family of carnivores called Eupleridae that are completely unique to Madagascar. The ancestors of the fossa and all other Malagasy carnivores were probably a relative of the mongoose that arrived on Madagascar around 20 million years ago. 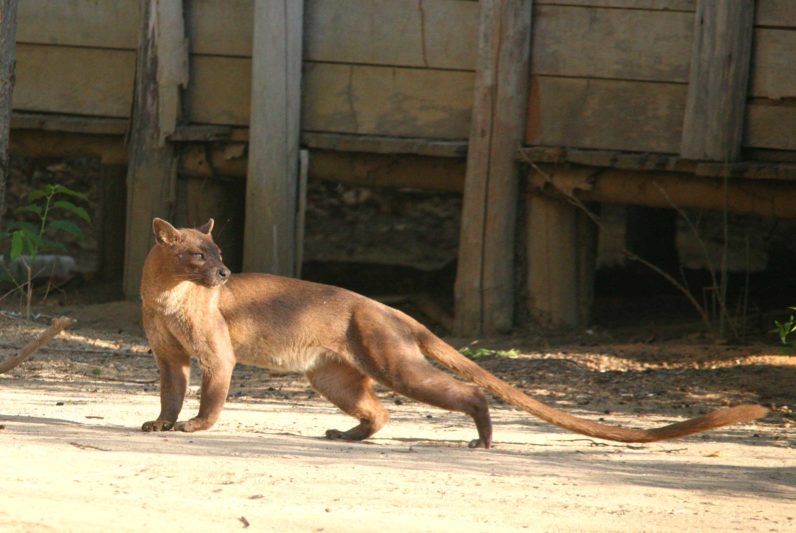 (Fossa in front of bungalows at Kirindy Lodge – Ian Loyd)

The fossa occupies the niche of top predator in Madagascar, where they specialise in hunting lemurs and are well adapted to pursuing them through the trees. They also eat tenrecs, reptiles, birds and even fish. With such long tails for balance, they are excellent climbers and are widely distributed across Madagascar’s forested habitats including both rainforest and dry deciduous forest. However their population is sadly rapidly decreasing due to the ongoing habitat destruction for slash and burn agriculture and also persecution in some areas. Despite their wide distribution, fossa sightings are actually very rare in most National Parks and Reserves because of their elusive and crepuscular nature. However there is one location which is the exception to this. 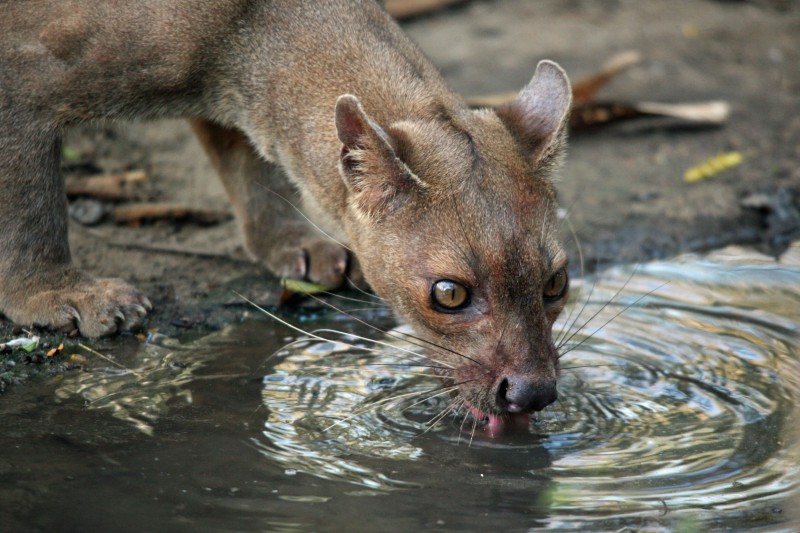 By far the best place to see and photograph a fossa in Madagascar is the wildlife rich dry deciduous forest at Kirindy Reserve, located about 2 and a half hours drive from the town of Morondava on the west coast.

Kirindy has been the base for many scientific and zoological studies in the past including a long running project studying fossa ecology. As a result of this, as many as eight fossa’s in the area have become habituated to human presence, making Kirindy a must visit destination for anyone keen to see this charismatic animal.

The best time for fossa sightings is between August and December (the driest months of the year) when several fossa’s actually pass through the Kirindy Lodge grounds looking for water and easy sources of food. They can be seen throughout the year though and another great time to visit is between mid-October and mid-November when they are usually mating.

Madagascar tour consultant Ian Loyd had a particularly memorable sighting of fossa’s on a visit to Kirindy he made in November 2014:

After arriving at Kirindy, I first spent some time walking around the perimeter of the Lodge hoping a fossa would soon be making an appearance (5 pm is a regular time for sightings), as this is the best time of day to spot them. The first excitement though came when I spotted a family of red-fronted brown lemurs making their way through the forest bordering the lodge. 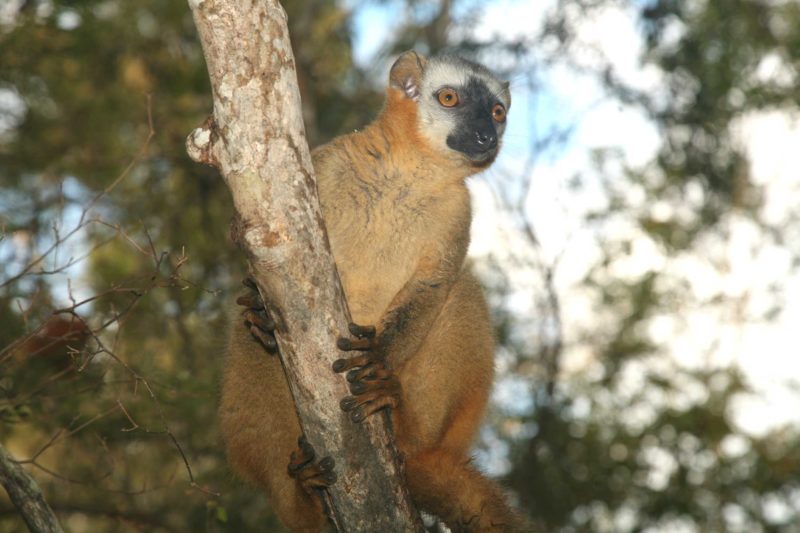 A squabble soon broke out between a mother lemur with a baby on her back and two other adults. The squabble soon became a full blown fight and the four lemurs came crashing out of the trees and began wrestling on the ground, just in front of me. It was at this point that I felt a small blast of air brush my legs. I glanced down to my left and saw a fossa sprinting past me! It was locked onto the wrestling lemurs and in full sprint. I believe it must have been watching the whole time and waiting for this perfect opportunity, it may have even been using me as a cover to stalk closer. Two of the lemurs spotted the fossa in time and reached cover in the trees, but the third which was the facing the other way, didn’t have enough time to react. Interestingly it was not an immediate predation and the fossa made its kill through big cat style suffocation. It was all over within about 1 minute, but my heart kept racing for several minutes afterwards. 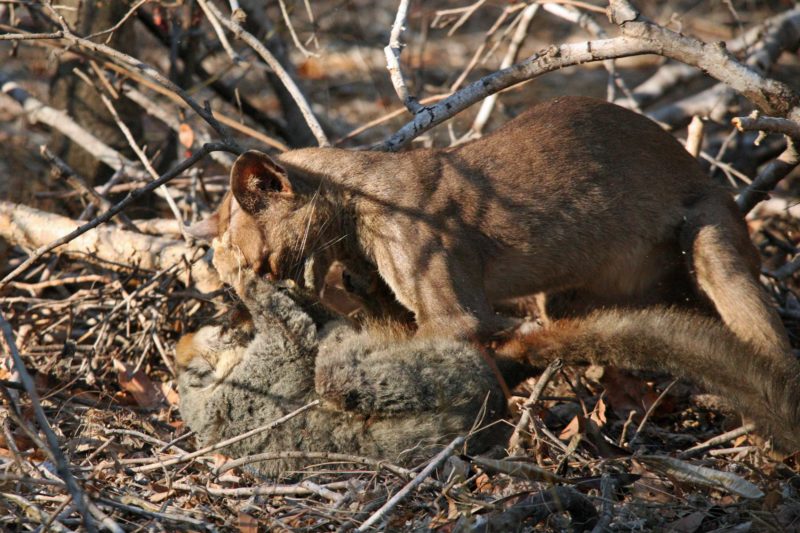 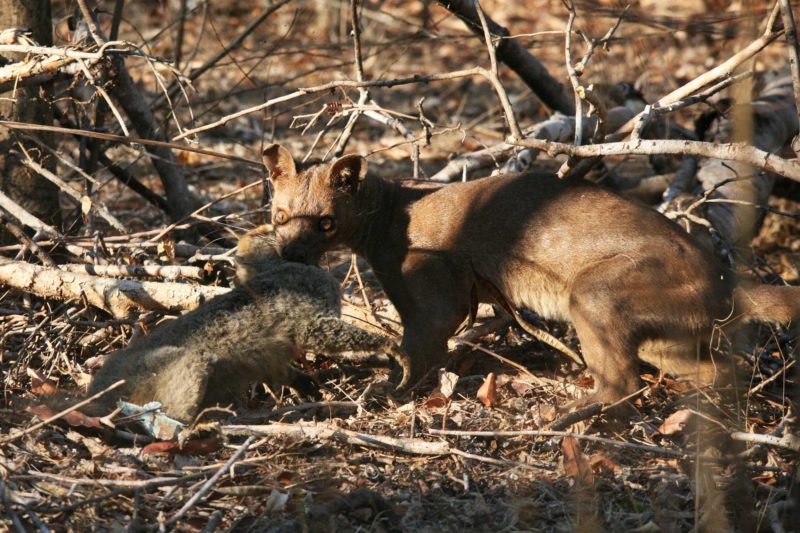 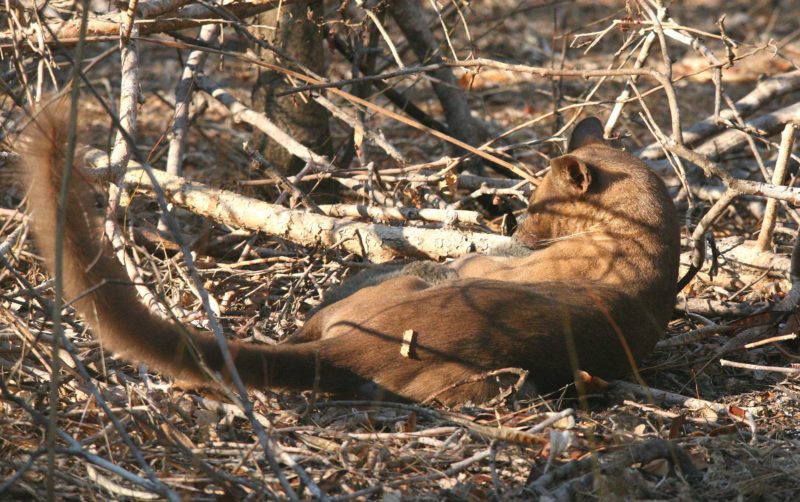 As if this was not enough fossa action for one day, I was then fortunate enough to see a female set up territory in her favoured mating tree where males attempted to mate with her. There was also even an extremely bold male who cleared up leftovers from the breakfast table the next morning. 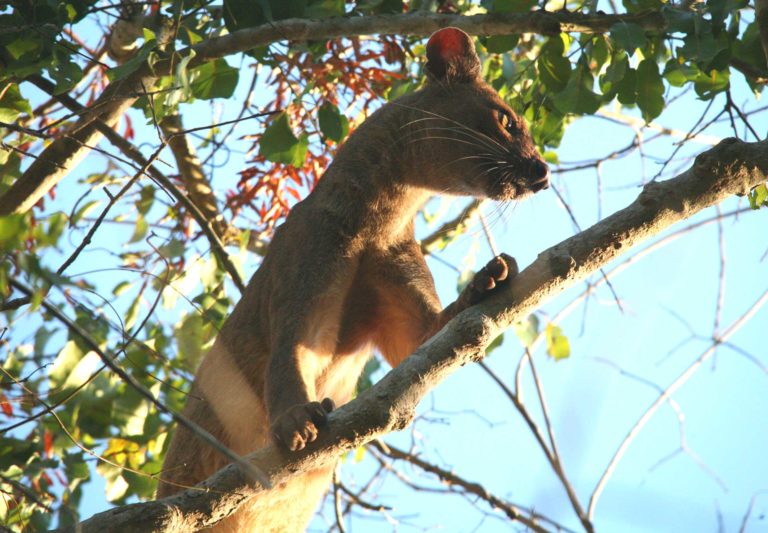 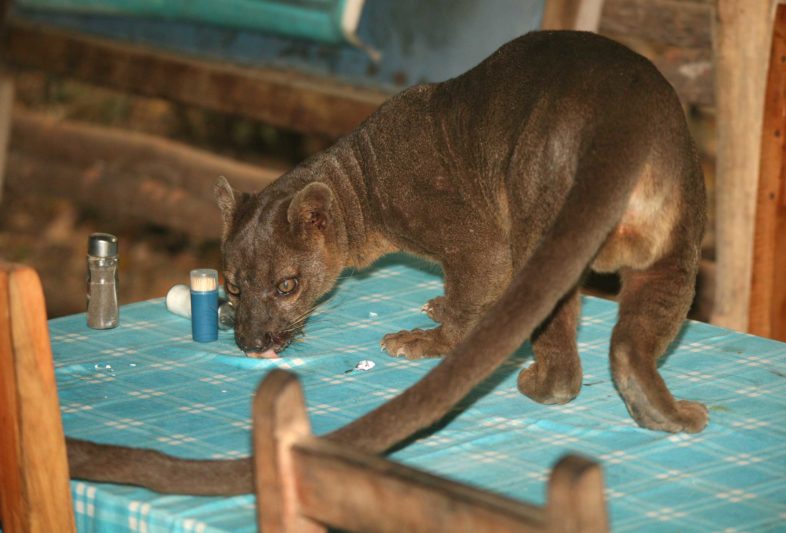 There is also of course much more to the Kirindy Reserve too with eight species of lemur including the Madame Berthe’s mouse lemur, which weighing just 30g is the world’s smallest primate. Over the past 25 years we have helped numerous clients enjoy wonderful sightings of fossas at Kirindy, so if seeing this unique and fascinating animal in the wild is high on your wish list, let us know. You can contact Ian directly about a trip to KIrindy and others of Madagascar at Ian@reefandrainforest.co.uk

An Overland Journey of Discovery through Madagascar with Daniel Austin