Reef and Rainforest clients Julia Tsoy and Matthew Roper explored Madagascar in October and November of 2017, seeing a wonderful variety of its unique wildlife and unusual landscapes. Below are some of the highlights of their journey:

Today started with a morning walk in search of some wildlife. We saw the Coquerel’s sifakas again, common brown lemurs and a whole bunch of birds. We came back to the hotel a little before noon for lunch and a rest, before heading back out for the evening walks around 4pm. In the afternoon we got a lot closer to the sifakas, saw a few more lemurs and chameleons and another two goats being transported on van rooftops. Turns out I’m also pretty good at spotting animals at night. Really just good at spotting glowing eyeballs reflecting light. Didn’t think it was that hard but appears it might be as had to point out several times and be all “Right THEEERE… you really don’t see it??” Also spotted a moth and a spider just because of their glowing eyes. Think I might become a night walk guide. But don’t expect to see any sleeping chameleons or anything without reflecting eyeballs. I did spot a snake and a chameleon though in a tree on the way in to our night walk. Then we saw the same snake eating the same chameleon on the way out! 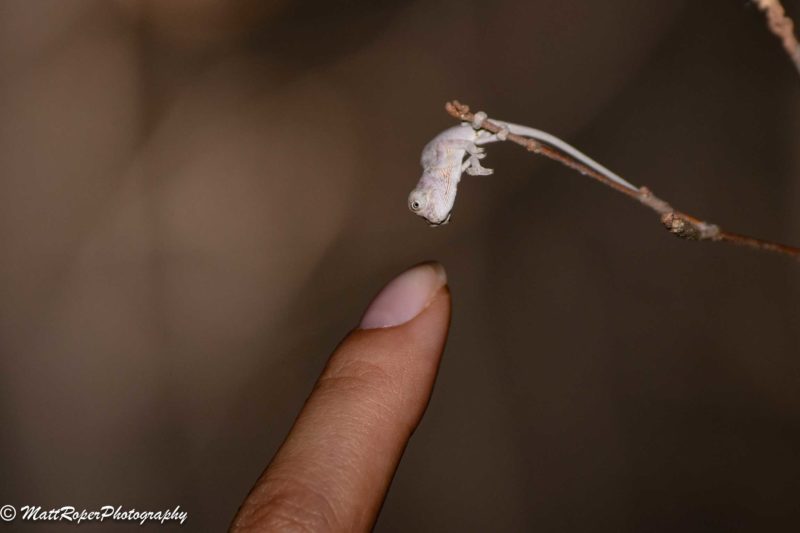 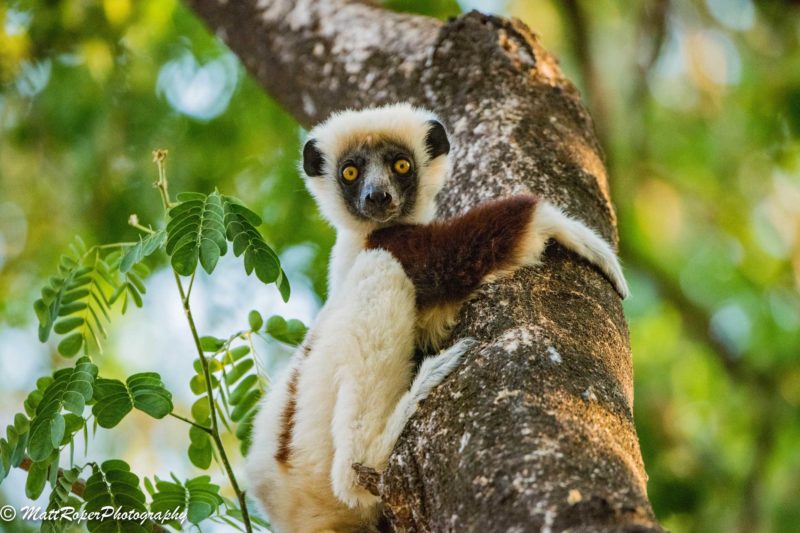 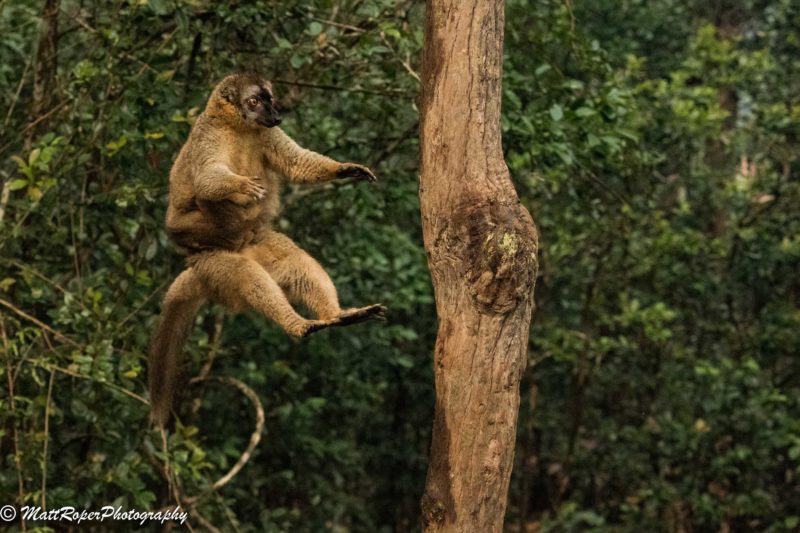 For tonight’s walk the guide asked whether we wanted to go in the forest or stick around camp to see if the fossa will show up. He said the fossa hasn’t visited the grounds for about three days so the chances are high it will come today. We decided to do a short forest walk and then wait it out in the “courtyard”. We saw the Verreaux’s sifakas again and watched a baby practice jumping. 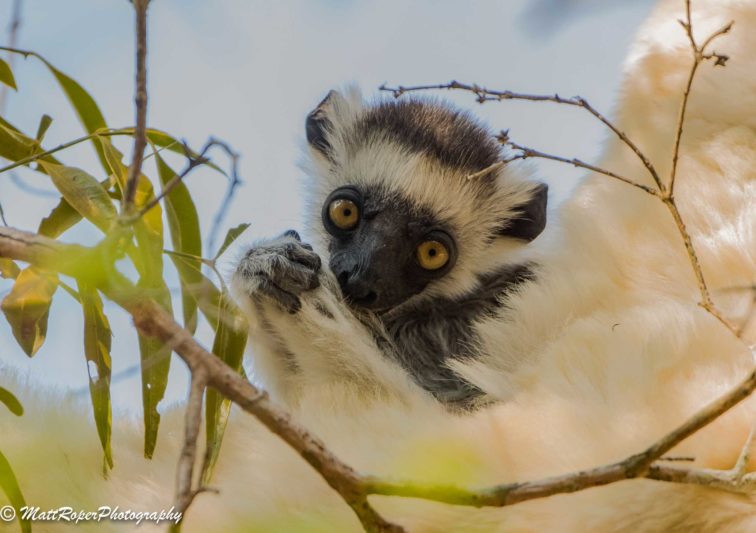 We also got a good look at the red-tailed sportive lemur although he jumped back in his tree hiding spot and only had his head could be seen sticking out for the photos again. As soon as we got back to the grounds after our short walk we were told a fossa was there. She headed for the garbage to get some food but we kind of interrupted her dinner for a little photo shoot. Not to worry. She went right back to it shortly after. Since we saw the fossa we were able to go back into the forest to look for the tiniest primate in the world, rather than sit around and hope for a fossa to show up. And see it we did! It’s adorable! Then it was a pretty cool ride back through this “tree tunnel” one lane road back to camp. When I asked our guide Mia, he said if two cars take the same road in opposite directions then one will have to go backwards depending on who’s closer to either end. Another candlelit dinner to end the day. 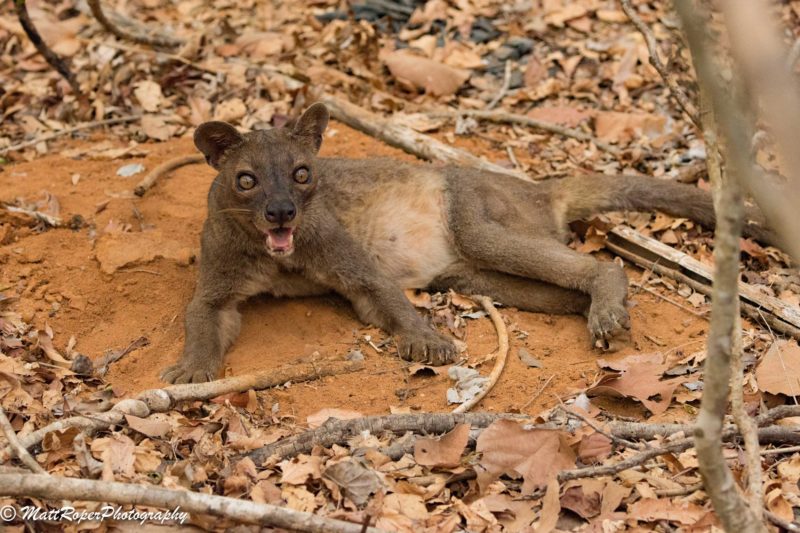 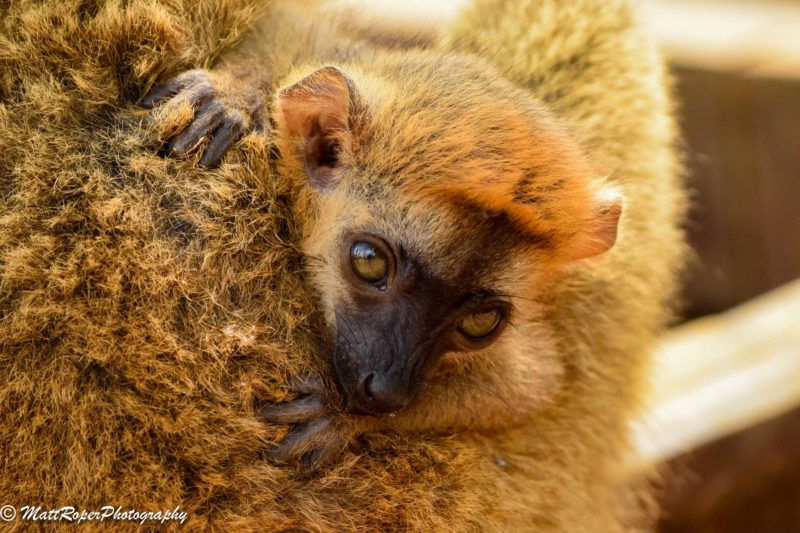 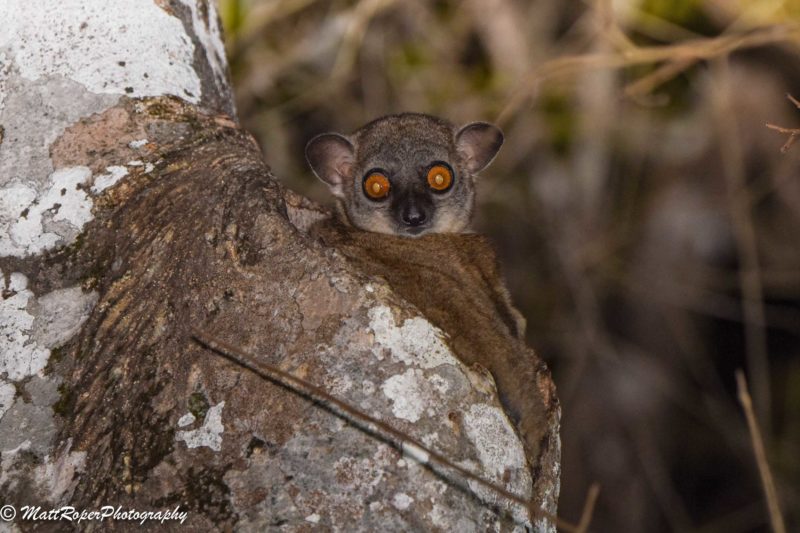 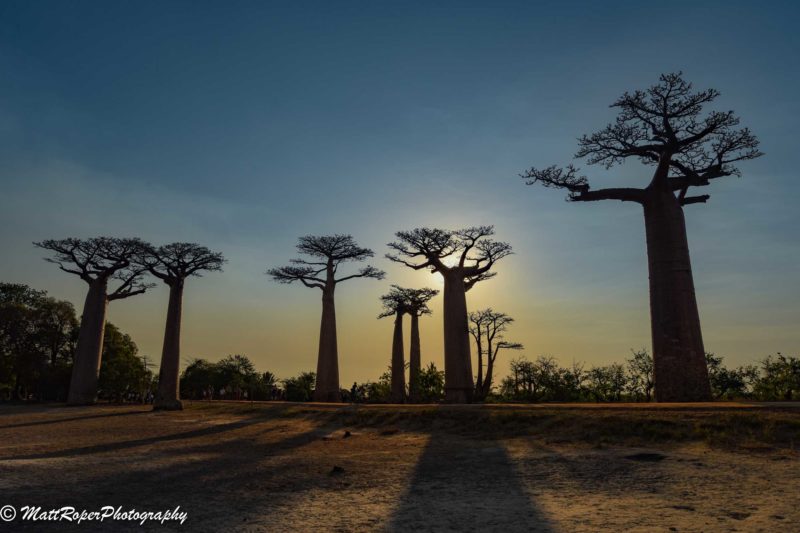 Ahh… this landscape is more of what I think I was expecting in Madagascar. We opted for a morning hike at Ranomafana National Park and it did not disappoint.

The terrain was steep and a little muddy but the trails are actually pretty set and there are little steps made for all the tourists. We did have to go off trail to get closer to the animals and that was pretty fun. It was totally worth it to see the greater bamboo lemur which got so close to me! He walked right towards me on that tree trunk and then pretty much just jumped over my head to another tree. We saw leaf tailed geckos… a female and a male. The female has smooth edges on her tail while the male’s is more jagged. We saw a few more animals and almost got to watch a chameleon try to catch an insect but his meal flew away. 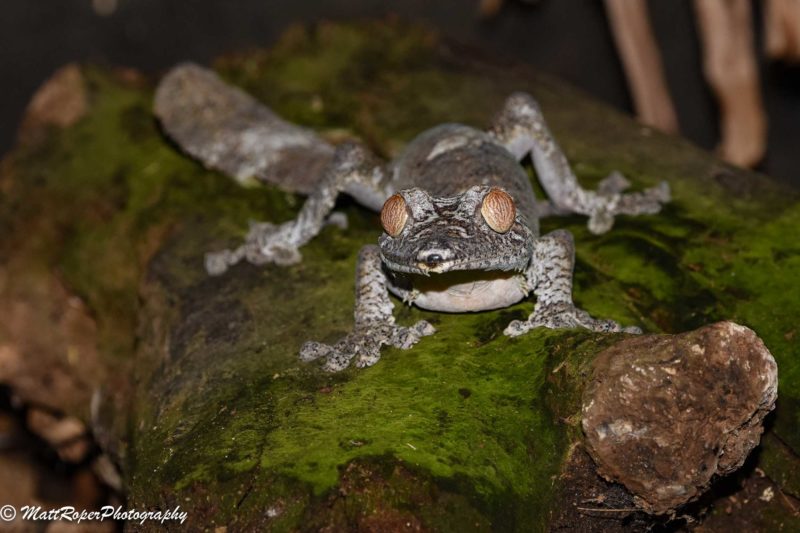 Then we made a quick visit to a reforestation program at Kianjavato Forest Reserve. Last year they reached one of their milestones by planting their 1 millionth tree. Their goal for this year is to plant 500,000 trees. They’re close and now they’re 2 trees closer thanks to me and Matt. Then we were off to spot a few more lemurs and the Aye Aye! We saw more bamboo lemurs and black and white Milne Edward’s sifakas. And then it was time to settle down and wait for the Aye Aye to come out. We had a choice to see a male, who we were told is a little more active, or a female, who is pregnant so is a little more careful about her movements and takes things slow. We opted for the female in hopes of getting better photos. Since it was on a steep incline the nest was right at our eye level and only a few feet away. Perfect! Or so we thought. An hour past the usual Aye Aye appearance time the guide and students (these are collared and studied Aye Aye) decided to check the nest and yup, maybe it’s the full moon maybe it’s just the time but the female decided to give birth today so she wasn’t going to come out any time soon and we still had a 2 hour drive back to the lodge. So we made the decision to not wait for the female but maybe see if we can spot the male on the way back. We basically ran down the hill in the dark in hopes of getting a glimpse of this interesting animal. Glimpse we did get but that’s about it. He was so high up in the tree that it was impossible for me to get any decent photos. Matt had better luck with his flash but still not as great as it could have been at the female’s nest location. At least we did get to see the male. And hear him as he gnawed on branches to get at those grubs. 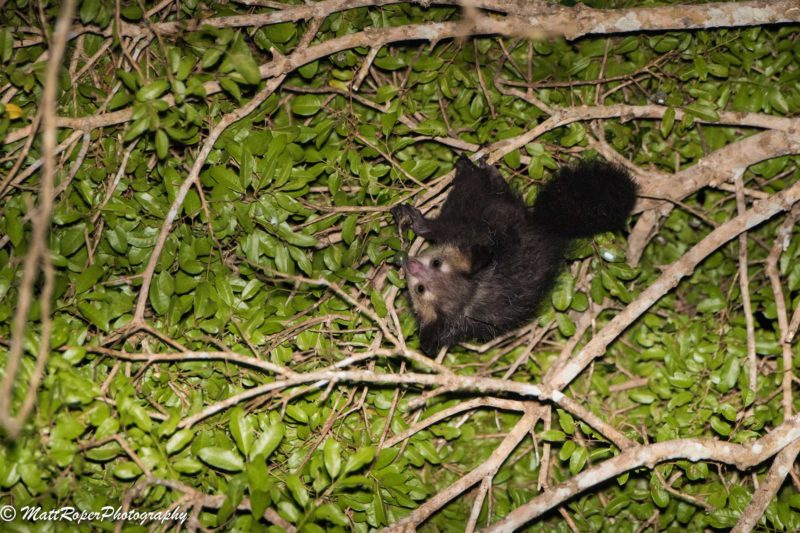 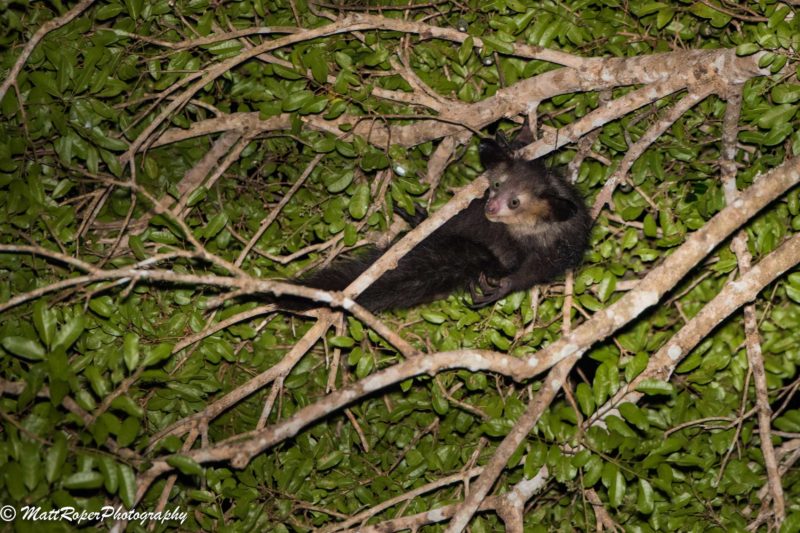 On our walk back to the car we also saw a woolly lemur which kind of looked like an alien. It was a bit of a disappointment not to see the Aye Ayes better but to be honest sitting up there in this rainforest with all these fireflies glowing around you was so serene and almost magical.

Our next stop was Anja Park for some ring-tailed lemurs. We came across a big family with a whole bunch of babies running and jumping all around us just arm’s length away. We sat here peacefully and just watched them play. 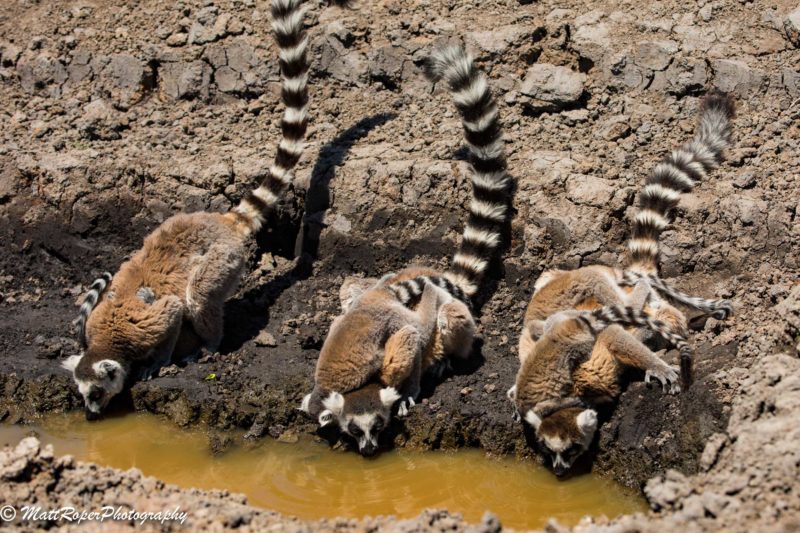 We started the day with a morning walk and in this rainforest it is not easy to spot animals. The trees are tall and the brush is lush. It kind of reminded me of the movie Predator and I was waiting to see some light distortions in the canopy. But all we kept seeing for the most part are insects and other ground dwelling creatures. Then we heard the infamous indri calls and ran to find them. Indri are the largest of the lemurs and have some impressive calls. They almost sound like whale songs at times. We found a couple of them but it was hard to get a good look at them so high in the brushy trees. 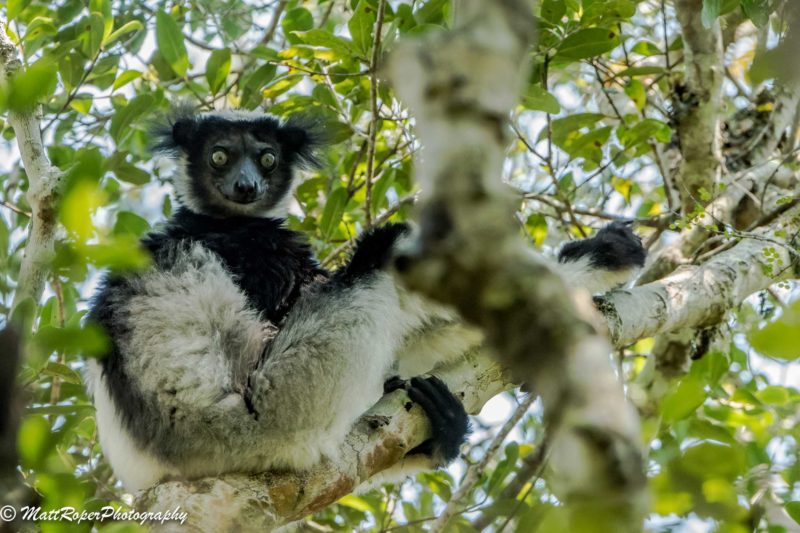 Being the largest lemurs their jumps covered quite some distances and they were out of our sight relatively quickly but we kept hearing them every now and then. On our way out we saw the Diademed sifakas and the giraffe-necked weevil! We had been looking for this little guy for a couple of days now so glad we finally got a good look at one. 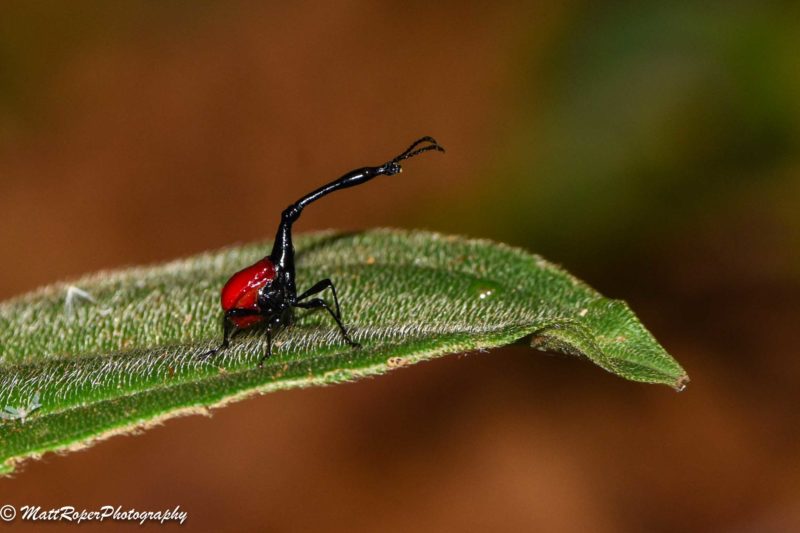